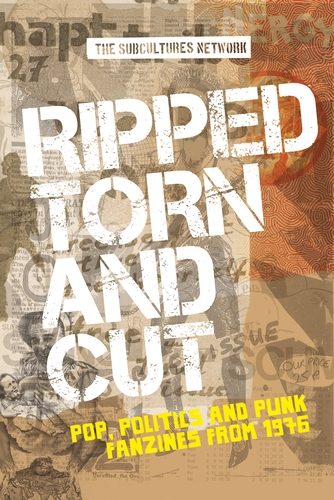 Ripped, Torn and Cut: Pop, Politics and Punk Fanzines From 1976

When Mark Perry produced and distributed the first self-proclaimed British punk rock fanzine Sniffin’ Glue, I wonder if (in his seemingly apathetic editorial stance) he would have expected the very notion of punk fanzines to have any longevity beyond this first issue. Least of all, would he have at that point considered, or indeed cared, about the potential cultural significance that punk fanzines may wield in relation to popular culture? Such is their significance that a large number of books, book chapters and article – both academic and non -academic – have been written about punk fanzines.

Authors such as Teal Triggs (2010), Ana Raposo (2011, 2013), and Rebecca Binns (2017) have generally focussed on the form and aesthetic of punk fanzines, whereas Stephen Duncombe (1997) and Dave Laing (1985) consider fanzines as a form of counter-hegemonic underground alternative press. Matthew Worley (2015) and Matt Grimes (2016) are some of the few authors who have examined the discursive content of punk fanzines as a resource for identity construction. In relation to this, Laura Cofield and Lucy Robinson (2016) have argued for punk fanzines as a site for feminist DiY community building. These examples are but a few of the many academic texts on punk fanzines that proliferate the academic and research community. Similarly, cultural commentators such as Paul Morley, Jon Savage and Tony Parsons, to name but a few, have all praised punk fanzines for their alternative reportage of the punk subcultures and scenes that emerged across the UK in the 1970’s and 1980’s.

So, with this vast legacy of analysis and written work on punk fanzines, it would seem that there was very little left to say about them that hasn’t been said already. Well readers that is where we are wrong. Ripped, Torn and Cut: Pop, Politics and Punk Fanzines From 1976 penned and edited by members of the Subcultures Network (an interdisciplinary network for the study of subcultures, popular music and social change) doesn’t necessarily fill any obvious ‘gaps’ in the general discussions around punk fanzines, but certainly adds some interesting and insightful perspectives to the established oeuvre of work. What the Subcultures Network have managed to achieve, in this useful addition to discussions on punk fanzines, is to bring together a broad selection of work from a number of academic and non-academic authors who interrogate the punk fanzine on a number of levels: from its aesthetic and artistic production and presentation to its political and ideological discourses, historical and cultural significance. Covering national and provincial punk cultures and scenes, this book ably documents a bottom-up collaborative history of punk fanzines from 1976 onwards.

With an insightful and somewhat humorous foreword by Tony Drayton – a well-respected editor and producer of two seminal punk fanzines ‘Ripped and Torn’ and ‘Kill Your Pet Puppy –the scene is set for a well-structured book that discusses the punk fanzine on a number of levels. The book is divided up into four sections that chart the politics and practices of punk fanzines. The first, ‘Going Underground: Process and place’, introduces the core theme of the book – the historical importance of the punk fanzine, not just as a resource for historians but, as the editors assert, historical writings in themselves that construct historical narratives and identities. Section two, ‘Communiqués and Sellotape: Constructing cultures’, interrogates the role of the punk fanzine in the construction of cultural politics and cultural identity. What was really encouraging to see within this section was Claire Nally’s examination of the evolution and development of Goth through the fanzinesPanacheand Propaganda.The documentation of Goth subculture through the form of its fanzines has often been overlooked by the academy.

For me, the most exciting and informative section of this edited collection is section three – ‘Memos from the Frontline: Locating the source’. Here, The Subcultures Network make a progressive step by bringing into the ‘academy’ the voices of those once-young and enthusiastic punks, who actually produced the fanzines often interrogated by cultural historians, journalists, academics and researchers. Here the reader receives a ‘warts and all’ insight into what it was and meant to edit, produce and distribute a punk fanzine during the 1970s and 1980s on a shoestring budget of fuck all. In this section, the passion and motivation, but also the sense of self-doubt and lack of confidence in what some of them were doing, really comes through and adds a sense of realism. For this inclusion, the Subcultures Network should be commended. This decision gave producers and editors of some of the punk fanzines equal agency in the studies that discuss and analyse their work and sets this book apart from many of the others that address the same topic and materials. The last section of the book ‘Global Communications: Continuities and distinctions’ moves the discussions around punk fanzines away from the UK and out into the fanzine cultures of the USA, Germany and Holland. Here notions of archival practice, scene maintenance and body politics are astutely exposed, examined, and critiqued. This section nicely book-ends what is a useful and timely collection of writings on punk fanzines.

So, is there anything missing from this book? Well, the discussions on punk fanzines are never going to be fully explored in a single book and, as the editors of this volume note, the book does have its limitations, such as a need for greater attention to class and race. Perhaps these limitations should most usefully act a clarion call for a future volume by the Subcultures Network that, now the ground work has been done, can dedicate more space to investigating how class and race have impacted on punk fanzine production, distribution and consumption. As I note at the beginning of this review, this book doesn’t necessarily fill any obvious ‘gaps’ in the general discussions around punk fanzines, but certainly adds to that established oeuvre of work in a distinctive and interesting way.

Binns, R. (2017). A Humorous Offensive: Tracing the Development of an Anarcho-Punk Aesthetic in Gee Vaucher’s images for Crass (1979-84). In: M. Dines and L.Way, eds. Post Graduate Voices in Punk Studies: Your Wisdom, Our Youth.Newcastle Upon Tyne: Cambridge Scholars Press. pp145-156

Grimes, M. (2016) From Protest to Resistance: British Anarcho-Punk ‘zines (1980-1984) as Sites of Resistance and Symbols of Defiance. In M.Dines and M.Worley, eds. The Aesthetic of Our Anger: Anarcho-Punk, Politics and Music.Colchester and New York: Minor Compositions. pp157-178

Raposo, A. (2011) Never Trust A Hippie:  The Representation Of ‘Extreme’ Politics in Punk Music Graphics and the Influences of Protest and Propaganda Traditions. London: UAL.

Raposo, A. (2013) 30 years of agitprop : the representation of ‘extreme’ politics in punk and post-punk music graphics in the United Kingdom from 1978 to 2008.Doctoral thesis. . University of the Arts London.