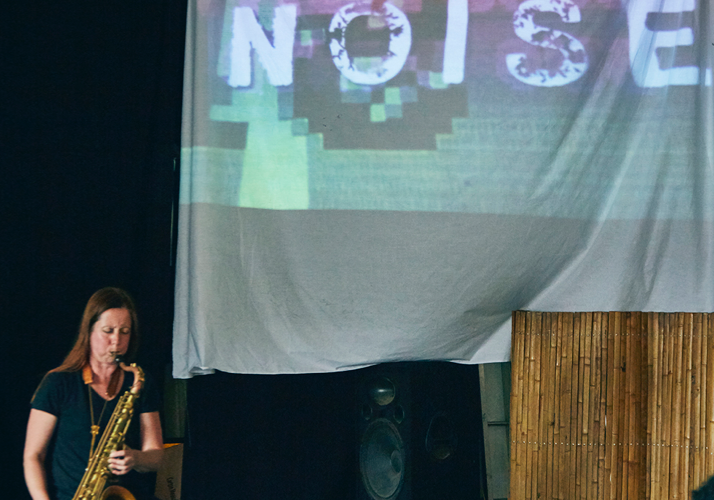 On the 3rd of July, Riffs organised a one-day writing workshop as part of Ideas of Noise, an experimental music festival in Birmingham. We were thrilled to host as our speaker Frances Morgan, Commissioning Editor for The Wire, and saxophonist and composer Rachel Musson, who acted as the prompt for the writing workshop that followed.

In response, Craig Hamilton – one of our co-Managing Editors – created a sound piece and the following summary of the process:

At the Ideas of Noise event on Friday 3rd August 2018, I started taking notes for what I imagined would become a blog post about the event for the Riffs website. As an editorial team we were in attendance to promote a special issue of Riffs around ‘Ideas of Noise’. As I started typing, however, I changed my mind. I decided to write the piece ‘live’ in order to see what happened. So I started to write, edit, write, edit. A little while later, I was struck by the strange moments of serendipity that were occurring as I listened to the ideas put forward by Francis Morgan in her talk: the ambience noise of the room; the sound of the venue staff preparing lunch; and the words I was writing/editing very often seemed to be in some kind of odd three-way call and response. Francis would say something on stage, and a noise from the street would chime with her thought. It was odd, and perhaps the heat of the day was a factor.

The idea then presented itself of making something that could capture what I was experiencing. Without too much thought for what I was doing, or where the idea was going, I took out my phone and started recording short audio snippets. The began to brew into the idea of using those recordings as the ’soundbed’ for a spoken word version of my still-evolving written piece. I recorded nine snippets in all, over a period of about an hour, and did not stop to think too hard about what I was capturing. I simply held my phone in the air, pressed record on the in-built sound recorder, and then saved the files.

A month or so later, I imported those files to a digital audio workstation and began chopping them up. I first looked for sounds that made a waveform that could potentially be percussive. I chopped and looped those tiny fragments, using the DAW grid to place them in a 120bpm, 4/4 pattern. I then found short sections of speech – usually one or two words – that the recorder had picked up. I chopped and looped those in a similar fashion. My nine audio snippets had also captured parts of Rachel Musson’s performance. I chopped out one or two bar sections, and once again begin looping. I then used larger sections of ambient sound (clapping, talking, general noise) and began layering those on top. Relatively quickly a ‘piece’ began to emerge that seemed to capture many of the sounds I had heard that day. I then reading aloud my piece – unedited from the day I wrote it – into the same recorder on, the same phone, and imported that into the digital audio workstation in the same way. I chopped out some of the longer pauses, leaving my spoken word monologue in several pieces. I then attempted to construct an sound/audio/spoken word narrative, moving the loops and ‘found sounds’ around so that they responded, hinted at, or otherwise bounced off the words I’d written/spoken/recorded. Finally, I started to add some basic effects to the various components: reverb, pan, eq, and so on.
The result of the process described above is what you can hear in the file below. I have never made anything like this before – I play in a country band. The whole process took around two hours and I suspect that the more sonic/technically minded amongst you will be able to spot where considerably more work than that could usefully be applied. But, to me, what I ended up with feels very much to have captured some of the spirit of the event, and the experience I had, which is what I had hoped to do. I think Johnny Cash would probably dig it, if not the sound itself then at least the spirit of the endeavour. And that’s good enough for me.

This collaboration will be continued in our fifth publication, Vol. 3 Issue 1, in Spring 2019, but until then we can share some one-minute pieces written by workshop attendees and photographs by Ian Davies.