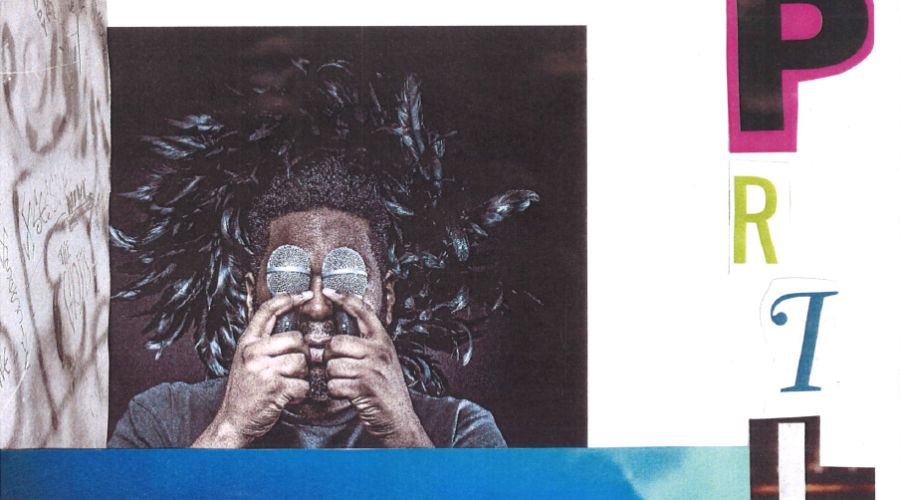 This blog post is about some recent activity from BCMCR (Birmingham Centre for Media and Cultural Research) researchers in the popular music studies research cluster. The work emerged from Riffs: Experimental writing on popular music, a post-graduate journal set up in 2016 by PhD students and ECRs (Early Career Researchers) within BCMCR. Riffs offers postgraduates at BCU and beyond a creative and experimental space for writing and thinking about popular music, and as a publication provides an outlet for high calibre postgraduate research in the area of popular music studies. As part of the editorial board, we are currently working towards our third issue, and have previously held an experimental writing workshop under the Riffs banner.

On Saturday 21st April 2018, representatives of the Riffs editorial board attended the Surge In Spring II music festival, held at the Birmingham midlands arts centre (mac).  Surge in Spring II was a one-day festival that featured two world premieres, a cast of over fifty musicians from three continents, and a programme that encompassed jazz, electronica, hip-hop, classical, spoken word, reggae, and folk music.  Live music was performed throughout the day on three stages: an open-air stage in the main public courtyard and two larger venues inside the centre. Attendees ranged from those who had purchased tickets for the indoor events, to others who were enjoying the warm weather with a visit to Birmingham’s Cannon Hill Park, which is next to the Midlands Art Centre.

Producing a ‘zine-journal in a day

The role of Riffs at the festival was to produce a ‘fanzine’ style edition of the journal across the course of the day. Everything was to be written, edited, collated and produced from 12pm (when the festival opened) until 8pm when copies were distributed following the final performance of the day. The Riffs team were tasked with producing 100 physical copies by 7pm for musicians and attendees. In addition, the team were also asked to make the paper copy available as a digital edition shortly afterwards.

Musicians performing at the festival, as well as festival attendees, were invited to submit pieces for inclusion in the ‘zine journal. Communication to potential contributors stressed that submissions could include written pieces, photography, artwork and poems, but could also take the form of notes, doodles, and short, scribbled observations. Our hope was that everyone who wanted to contribute could do so according to respective abilities and interests. To help guide submissions, we set up in a ‘pop-up’ editorial space at the heart of the festival, enabling us to meet with prospective contributors, or those simply curious about what we were doing, and in the wider work we do as part of the BCMCR. We provided materials such as paper, pens, scissors, and so on for hand-crafted contributions, and also accepted submissions via email. Alongside pens and paper, our production setup comprised of a small, flatbed scanner and printer, and several laptop computers.  The mac provided us with access to their media suite, and importantly to their photocopier which was to be our means of producing the 100 required copies.

In advance of the day we produced the following brief that was then posted around the venue, and invited of one of the festivals headline artists, Juice Aleem, to act as our guest editor.

Time Passes, Time Passages: In Poetics of Music, Igor Stravinsky writes that “All music, whether it submits to the normal flow of time, or whether it dissociates itself therefrom, establishes a particular relationship, a sort of counterpoint between the passing of time, the music’s own duration, and the material and technical means through which the music is made manifest” (Igor Stravinsky, Poetics of Music in the Form of Six Lessons, pp.30-31). Likewise, Alfred Schutz claims that in a musical performance, “the social relationship between performers and listener is founded upon the common experience of living simultaneously in several dimensions of time” (Alfred Schutz, “Making Music Together”).

The process of creating a ‘zine-journal of this kind is labour intensive, more than a little stressful, but also a lot of fun. Our first submission arrived shortly after 1pm, an hour after the festival started, and a steady stream followed throughout the day until in all 17 pieces were submitted before the advertised deadline of 5pm. By 3pm, when production started in the media suite, we had the front and back covers (and accompanying inner pages) ready to go, along with the centre spread based on Juice Aleem’s guest editorial.

At this point the Riffs team of four divided into two camps: one kept the wheels of production turning by feeding the photocopier with paper, folding the A3 sheets into magazine format, and collating pages; the other stayed at the public-facing editorial desk and frantically laid-out submissions in 4-page, double-sided master copies. Shortly after 6.30pm the final sheets emerged from the photocopier and then all hands worked quickly to assemble the 32-page, zine-journal from the 8 separate sheets. With a few moments to spare before 7pm, we emerged into the sunshine once more and distributed the Surge Riffs special issue.

Our work around Riffs emerged from a writing group that was established in 2015 by BCMCR centre director, Prof. Nick Gebhardt. As popular music scholars, many of the original ‘Write Clubbers’ straddled disciplines: music; sociology; media studies; cultural analytics, anthropology; and dance. Some felt adrift, on thin ice, and ‘Write Club’ offered the opportunity to produce 2,000 words that could then be explored as a group during monthly meetings. The group and the process of writing regularly allowed us to begin thinking about what it meant to research popular music, to write about it, to construct an argument, a description, a song, a line. Once our initial nerves were quashed it soon became comfortable to watch another person read your work, or to read aloud our pieces to the group. We slowly became more confident as writers, and over time the quality of our writing improved, until it seemed a crime to keep our work under wraps, hidden away from curious eyes on our private group blog.

This led to the creation of Riffs. Our first issue was produced in February 2017, and featured contributions from researchers in several countries. Issue two followed late last year. We are currently working on the third issue, which will go to print in the next few weeks. Alongside this, and our one-off activities such as the zine-journal described earlier in this post, we are also in the process of putting together a two-day conference/workshop that will build on the momentum generated by Riffs within the research community at BCU and beyond. Our long term aim is to establish Riffs as a publication and in so doing attempt to make a contribution to wider debates around the form, format and purpose of (academic) writing. As such, we offer the following, tentative questions that are guiding our future plans:

In setting up Riffs, we sought to offer up some of our thoughts and writing in the hope that we may be able to read yours, and that each of us will in some small way change how we think and write about popular music. Consider this your official invitation to Write Club.

To read more about Riffs, visit our website. If you would like to discuss ways we may be able to work together, please email info@riffsjournal.org, or say hello on Twitter where we are @popmusicjournal