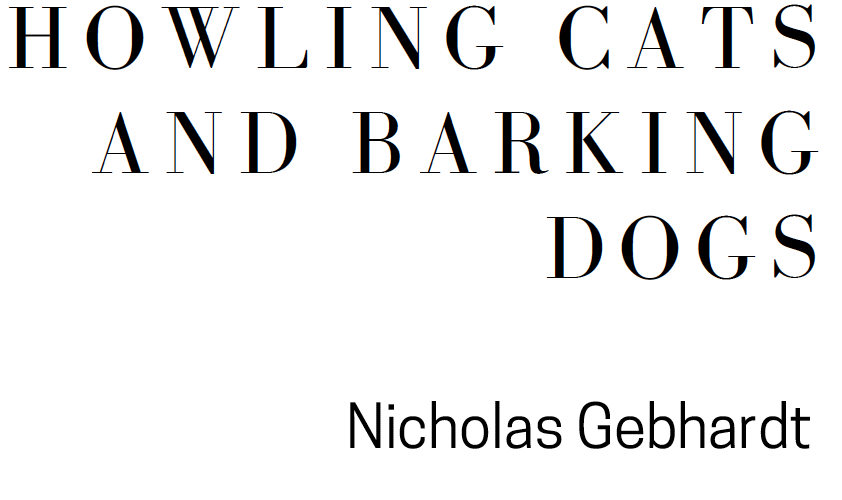 “We were living at the time in a tiny ground floor apartment in which I was trying to write,” the novelist Ralph Ellison recalls in Living with Music, his autobiographical account of Harlem in the early 1950s. “I say ‘trying’ advisedly,” he continues. “To our right, separated by a thin wall, was a small restaurant with a juke box the size of the Roxy. To our left, a night-employed swing enthusiast who took his lullaby music so loud that every morning promptly at nine [Count] Basie’s brasses starting, blasting my typewriter off its stand. Our living room looked out across a small backyard to a rough store wall to an apartment building which, towering above, caught every passing thoroughfare sound and rifled it straight down to me. There were also howling cats and barking dogs, none capable of music worth living with, so we’ll pass them by” (Ellison, 2002: 4).

Ellison’s vivid sketch provides a useful starting point for thinking about our ideas of noise. His evocation of an everyday auditory terrain, with its uneven, fluid and varied sonic contents, opens onto a different sense of musical experience that is subterranean and dispersed, as focused on the uneventful noises in our lives as much as it is about ordinary encounters with music. Sometimes there is just too much going on, too many competing voices, to know what to say or where to begin. And at other times, the silence can be overwhelming.

Check out "Ethnographer Soundclash: A UK rap and grime story" by Joy White and Jonathan Ilan in the latest issue of Riffs.
"As two different researchers of UK Rap and Grime, we are using the format of the soundclash to tell a story of the genres we study."
https://buff.ly/3z4SPgk

Check out Chloe Fenech's article "Julie Driscoll's Voice In the Blues" in Riff's latest issue. Fenech considers singer Julie Driscoll and her role within British blues. She aims to study her vocals from a practice-led and autoethnographic perspective https://buff.ly/3FxC7s5

“Resistance was composed in a pre-pandemic world and consequently, attends to global issues that were extant before we were gripped by COVID-19.”