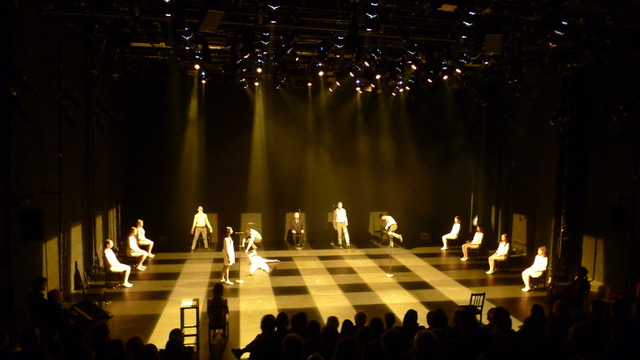 I was privileged to meet Robert Ashley at his TriBeCa apartment in May    2010. Over afternoon margaritas, we talked about his music and the   possibility of producing performances in Birmingham, about literature,   Europe (in the American imagination), and his wife Mimi Johnson – herself   a key figure in New York’s avant garde. I eventually got to present several     of his pieces in the Frontiers Festival in 2014, though Bob had become too    ill to travel and passed away only a few weeks before the opening.

Looking back over my notes from the time, three things now stand out. At  80, whilst planning new projects – not least a production of Quicksand – he  was ready to look back. I was clearly one of many knocking on his door to find what was left to be rediscovered. Gisela Gronemeyer and Reinhard Oehlschlägel, the founders Musiktexte, had persuaded him to publish many of his papers, interviews, and recollections, released as Outside of Time in 2009 in English and German. Kyle Gann’s biography was issued in 2012, and was no doubt in discussion and preparation by the time I turned up in Manhattan. He’d already turned much of his autobiography into his unique form of opera by 2003 in Celestial Excursions.

Amongst his suggestions to me was a lecture performance of the text from ‘Frogs’, the ‘illustrated tract’ that sets off his first opera, That Morning Thing. He didn’t mention conversations with Mark Beasley, the curator at Performa who persuaded Bob to mount a new production of the complete work, over four decades after the original, though these must have taken place at a similar time for the show to run at The Kitchen in November 2011.

Our meeting was also a form of performance. At least, Bob had created performances – including his first TV Operas, Music With Roots in the Ether, by staging conversations with his composer colleagues in the radical music community. Whether sitting with Terry Riley whilst he milks a goat on his farm, Pauline Oliveros being given a makeover during their exchange, or talking music economics with Philip Glass in the middle of a group of primary-school-aged children, these interviews are unlike any other. Conversation can be a musical form – the original polyphony! – and his operas exploit this with alchemical delight, forming gilded songs from the lead of dialogue.

Missing from my notes, unavoidably, is the texture of our conversation, the sound of Bob’s voice – though there are many examples of his speaking online. He commented on the music of my own voice, something I’d never considered, having become awkwardly conscious of it after my Mancunian accent was submerged through prolonged absence from home. His comment was shocking, but neither impolite nor uncomfortable. Perhaps he was listening to the differences in British accents, as Mark Beasley is from Stourbridge and Fast Forward – his former student, who directed That Morning Thing, is a Geordie.

The third part of the opera, ‘Four Ways’, stages and satirizes a particular form of speech act. The Director – Fast Forward – is interrogated in turn by each of the eight women in the production who ask him increasingly bizarre questions of the ‘tourist’ variety. “How do I get to Columbus Circle?” “Where can I find a good Chinese restaurant?” Fast responds with ever more arcane answers. It’s a moment of farce after the intensity of ‘Purposeful Lady’ with its suggestion of sexual violence, but I also hear in this the resonances of a story Bob told me. After graduating, he hadn’t travelled to Europe like many of his illustrious colleagues; the kind of money needed to do that was out of his league. He had learned written French, however, well enough to read Camus. When he eventually made it to France and found himself needing to ask a policeman a question – for directions, perhaps – he composed a beautiful sentence, only to find he couldn’t comprehend a word of the reply. Expecting only understanding, a response to his question, he discovered instead the strange wonder of a foreign tongue.